Here is a flowchart: 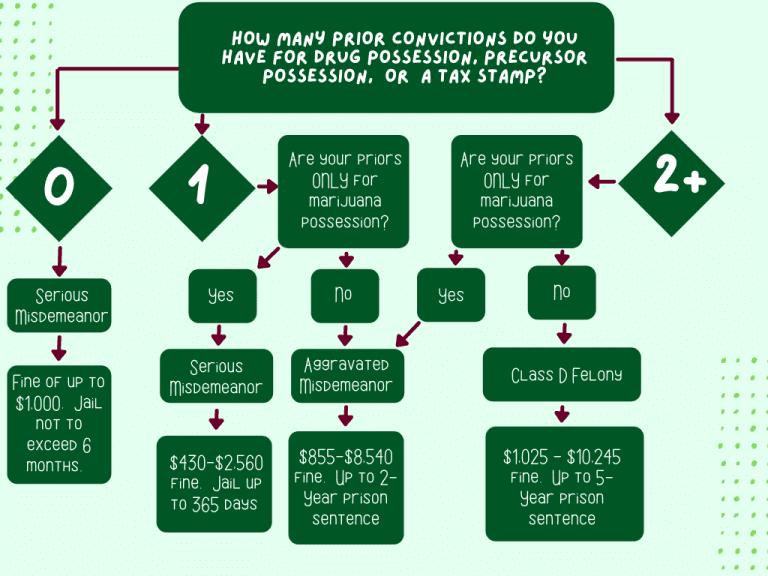 Your marijuana lawyer Iowa will help you understand your marijuana charge. A subsequent offense for drug possession may be a more serious offense. A second offense drug charge for even small amounts of marijuana could result in a prison term.

For possession of marijuana, first offense, you will pay a fine of up to $1,000. You could spend up to six months in the county jail. Iowa Code 124.401(5). There is a mandatory minimum of two days in jail for any drug conviction, even in a marijuana case.

The State may enhance your charge. For example, a prior conviction for possessing a different substance could enhance your marijuana charge to an aggravated misdemeanor. Violating precursor laws (Chapter 124B,) or a tax stamp rules (Chapter 453B) could also cause enhancement. Two or more priors could make your first offense Marijuana Possession into a Class "D" felony.

If you are convicted of first offense marijuana possession, the Court will sentence you to at least 48 hours in jail. The judge can suspend that mandatory minimum sentence. If the judge suspends your jail time, the court will put you on probation. If you attend probation for a drug crime, you must submit to random drug testing.

It's possible that you will be eligible for a deferred judgment if convicted.

Anything containing marijuana or THC may be deemed illegal "marijuana." You could be charged with a drug offense for possessing cannabis oil or edibles. Even possessing CBD oil could be a marijuana crime. Iowa does not allow recreational marijuana use in any form.

Medical Marijuana and the Prescription Defense

Permanent Iowa residents who are at least 18 years old can now apply for medical marijuana in Iowa. Health care practitioners sign written certifications that patients are suffering from a debilitating medical condition. The patients submit those certifications to the department of health and pay a fee of $100. (The fee is only $25 for people who are on social security disability, supplemental security insurance, or medical assistance.)

If you're driving through Iowa with your valid medical cannabidiol card from your home state, it is entirely possible that you will find yourself arrested and your medication seized.

Under Iowa law, though, that shouldn't happen. Iowa Code 124E.18 has a reciprocity provision. Out-of-state patients with medical cannabidiol registration cards should have their cannabidiol cards recognized. Out of state cannabidiol cards don't allow you to buy medical marijuana from Iowa cannabidiol dispensaries, though.

Some counties have not recognized reciprocity for other states' medical marijuana cards. When patients' medication is marijuana, rather than cannabidiol, Iowa has charged those patients with illegal possession of a controlled substance.

Any state or federal felony that involved possessing, using, or distributing a controlled substance will disqualify you from getting an Iowa medical marijuana card.

It is illegal to have a controlled substance in Iowa. There is an exception.  Valid prescriptions and doctors orders exempt patients from prosecution.

The problem is that neither Iowa law nor federal law specifically allows for medical cannabis. Marijuana is a Schedule I substance. The government does not recognize any valid medical use for marijuana. Obviously, many medical practitioners disagree. Marijuana is widely prescribed in many states. For example, Illinois implemented their Medical Cannabis Patient Registry Program in 2021.

Under the controlled substances act, prescriptions require valid medical purposes. What happens when one state recognizes marijuana's medical applications but another state does not?  How does the federal government's opinion affect this?  Some states, such as Arizona, suggest that federal law does not preempt states' medical marijuana programs.  They reason that the CSA requires a medical purpose.  While federal law does not recognize a medical purpose for marijuana, those states' laws do. Patients in these states may use their medical marijuana cards to purchase medication at a licensed dispensary.

Did law enforcement get a warrant?  Did they search you?  How about your home or your car?  Your criminal defense attorney will review any search. If a magistrate signed a warrant without probable cause, your criminal defense lawyer may be able to get the evidence suppressed.

The State of Iowa bears the burden of proving you guilty of your possession charge. You cannot receive a marijuana conviction at trial unless the State proves all elements of the offense.  Ask your lawyer about reasonable doubt. If the police serve you a summons to appear, a criminal defense lawyer can help. Ask an Iowa marijuana possession lawyer to explain Iowa's marijuana laws to you.

The government must prove that you possessed a controlled substance. Simple possession is not always so simple.

Criminal possession requires proof of knowledge. For the marijuana offense to stick, the prosecution must show that you knew about the drugs. They have to show that you occupied and controlled the premises.

A marijuana possession charge also requires you to know what the substance is. Marijuana law does not punish you for marijuana that you honestly believed was just a horse chestnut plant.

Identity of the Substance

Previously, the DCI laboratory could not tell the difference between illegal marijuana and legal hemp. This is because their test could not quantify now much THC was in plant material. (To "quantify" something means to measure how much of it there is.)

Now, the lab uses liquid chromatography and mass spectrometry to quantify the THC in plant material. That means that some machines in the DCI lab can now tell marijuana and hemp apart.

They do not have to use a test to prove that something is marijuana. However, the lack of a test could lead to unreliable results. For instance, police have previously raided houses based on the smell of marijuana, only to find out that no marijuana was present! Sometimes, things like moss phlox, skunk, or hops can be mistaken for the smell of marijuana.

The government may also accuse you of possessing drug paraphernalia.

Penalties for paraphernalia aren't exactly steep. Paraphernalia is a simple misdemeanor. If you're facing something like drug charges with intent to distribute, paraphernalia charges may seem negligible. The government still must prove guilt.